This camp was transported via rolagon in Spring of 2013 to support an environmental cleanup operation.

The camp and services were so well liked that the project was expanded into a demobilization project of facilities nearby and extended into late 2015, summer operations only.

We're not around right now. But you can send us an email and we'll get back to you, asap. 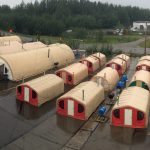 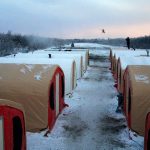